A second Christmas without Gail and I’d decided 12 months earlier that I was going to do something different. In my whole life I’d never, ever, not been at home on Christmas Day and that was about to change. This year I was going to volunteer.

Every year, when I attended the Carols for Shoppers concert at St James’s Church in Piccadilly they always spoke about their Christmas Day service and the fact they had their own Christmas dinner after, in which they opened their doors to anyone who had nowhere to go or who was alone for the holiest of days.

I wasn’t in the former category as I have a very nice home, but I suppose I could claim to be in the second category although conversely, I didn’t see myself like that. No, what appealed to me was that they were looking for volunteers to prepare, cook, wait on tables and feed those who came into the church. Perhaps comb the West End looking for homeless who could be provided with a meal.

Gail and I always visited London on Christmas Eve. The 24th of December was our day and going to the West End  was our thing. In the previous few years though, we’d questioned why we spent the best part of the day waking up, getting out and travelling to the West End. Why not just be there? So part of our later Christmas tradition was to stay overnight in a top hotel on the 23rd, wake up where we wanted to be on the 24th and spend the day in the City. We’d have a late afternoon / early evening meal and then travel back home to be in our own house on Christmas Day. It was magical.

My first Christmas without Gail had resulted in me staying in a hotel that I’d booked the previous January when she’d still been alive (Christmas Lights) but I didn’t want to stay in the same place as it would remind me of that first Christmas without her and I knew I couldn’t stay in any hotels we’d stayed in previously. However, there were enough top class hotels in the W1 area for me to choose from, I would stay in one close to the church, get there early on Christmas morning, prepare dinner, go to the service (I’m not religious I should point out but I just like church – particularly at Christmas) and then spend Christmas night drinking brandy and reliving tales of bygone years in a sort of oak-panelled, plush velvet emporium with no-one else but some visiting tourists and a suave barman, dutifully serving bar snacks and bon mots, as I stare disconsolately at a Dickensian style log fire. I have a vivid imagination. It doesn’t always serve me well.

Now to be fair, the hotel I’d stayed in that first Christmas and most certainly the last one I’d stayed in with Gail could reasonably have provided what I wanted for Christmas night. Sadly, although listed as one of the best hotels in the area; the one I actually  chose was bereft of Christmas magic. In fact, shorn of the large tree in the lobby and the people coming in wrapped up with gloves, hats and scarves, the hotel probably looked the same in June. The bar was uninspiring and lacked atmosphere. Worse though – and I didn’t even know this was a thing – it closed in the evening.

The day started well enough though. I’d worried that there might not be any Christmas magic; any of that Christmas Tree feeling. The atmosphere was great in the church though and it felt like being a member of  a secret club (Not that I know what that’s like, of course!) Everyone was there and pulling together, joking and keeping each other’s spirits up. I peeled enough spuds for a battalion and then started on the parsnips getting enough on to cook to allow me to attend the Christmas Day service without any anxiety. After, I helped put out the tables, laid them and began bringing the food up and waiting on tables. Many of the congregation stayed after the service with others, homeless or just looking for somewhere to spend the afternoon, came in after. Many had travelled miles – often walking – to get there.

I met and spoke to some lovely people; heard some tragic stories. I was thanked for my efforts by one Gentleman who asked why I’d offered to volunteer and was I going home after? I told him I wasn’t and I told him about Gail. He looked at me with sympathy before adding ‘I know how you feel. I lost my wife in October. Now I want to die’. It broke me up. I had to hurry away with a pile of plates to distract myself.

There was plenty to clear away, of course and the tables were moved and chairs put away while the Vicar – who’d started on a wonderfully poignant menu of carols and Christmas tunes on the piano – soon moved to Abba and Simon & Garfunkel hits. Everyone joined in and the gnawing pit of self-pity in my stomach began to feel a little less-hollow. The fact is though – although not a big drinker – I missed a glass or two of wine. And the Christmas dinner, superbly cooked and presented, wasn’t what Gail would have prepared. In truth, it wasn’t what I’d managed to cook myself the previous year either.

And then it was 4pm. It was getting dark, everything was away and it was time to usher out the stragglers and the lock the church up. Everyone was going home for their ‘other’ Christmas Day, so we said our goodbyes and I went back to the hotel.

It was there that the new-style Christmas Day I had prepared for – the one so many said was a wonderful and admirable thing to do – fell apart. I sat awkwardly on the bed trying to be entertained by Christmas Night TV desperately missing my Cats and feeling bad that they were having Christmas Day without me.

I couldn’t bail out. I had travelled up two days before by train so I couldn’t get home. I missed the house I’d shared with Gail. I missed her decorations that I’d put up again. I missed being with someone who loved me. I was disconsolate. I forced myself out and onto the streets, to Leicester Square where it looked as it did any other night of the year. But there’s a limit to what you can do in that area on your own, and wandering away from the bright lights and the tourists or locals meant empty streets and a desperate feeling of ennui.

The irony was the very thing I had gained from helping others had robbed me of the only thing that was keeping me sane – being at home with my memories of Gail and Christmases past. It seemed cruel that helping in the church and attending a religious ceremony on the holiest of days had precipitated me being at one of my lowest ebbs. If I volunteer again – and with the best will in the world I’m not sure I can – I will at least pay the exorbitant price to park my car so I can go home.

As it was my memories of my second Christmas without the love of my life are hideously painful. I didn’t think I could miss Gail any more than I did. I was apparently wrong. 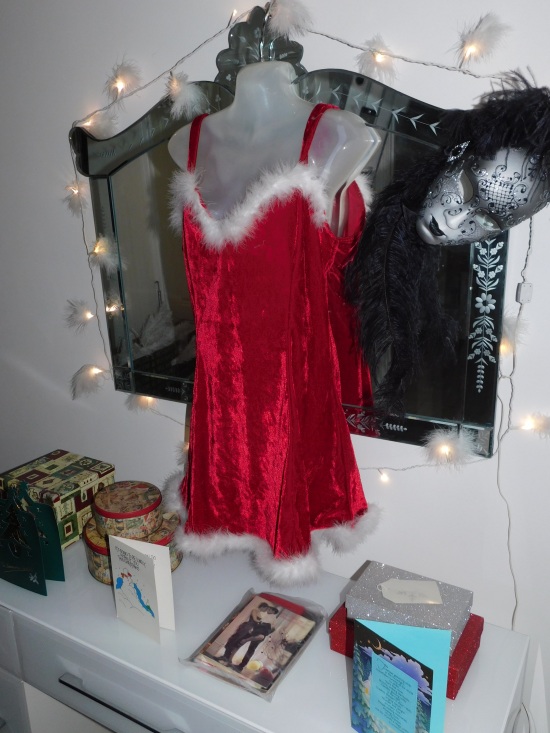 My Christmas Gail tribute in her dressing area. I know she’d have been impressed by this