I covered the difficult time of our Anniversary, Valentine’s Day and my birthday with a trip to Egypt including three nights in Cairo and a journey on the Nile from Luxor to Aswan. It was part of my rough life plan – I loath the term ‘bucket list’ – to do what I might not have done had Gail been here. I took a virtual version of her with me everywhere anyway, so I didn’t feel alone. Well, I did – but you know what I mean.

I’d booked this trip the previous summer and after my father died was concerned at how my mum would cope if I was away for ten days. That concern deepened later however as, with her ailing health during early January, I thought I’d have to cancel the whole trip. My mum was adamant that I must go though; telling a nurse ‘I need to get well. My son has a holiday booked and he needs to go to Egypt as always wanted to go with his wife’. Not strictly true – Gail hadn’t shown any desire to go to Egypt (I thought anyway) – but it was nice to hear my mum thinking about me at a time when she was critically ill, fighting for her own life and when should have had other things on her mind.

As it happened, it made no difference. My mum died in the second week of January and, although it made it a bit tight to organise a funeral – something I eventually decided to postpone until I’d returned – it meant  not only could I go on my trip as planned, I needed to go somewhere to help me over the past two months.

Then something interesting happened. About, about six weeks after my mum died and two weeks after I’d returned from Egypt, I was going through a box of letters and keepsakes that I’d kept of Gail’s and I found a ‘promise’ that we’d made to each other in 1988 that we’d never kept. I’d completely forgotten about it and it made me sit up.

Only after I found this did I  remember the conversation and the agreement. We’d never kept it because, at the time we were due to meet, I was living with my then wife and she’d married someone else a year earlier. I know I remembered the promise on that day in 1990 though; I wished I’d found this earlier so I could have discussed it with her, but I was also blissfully happy that I’d eventually got to see the Sphinx even if I was late by almost thirty years and wearing jeans and a Clash T-shirt instead.

It was a bit frustrating I’d not found it before I left, but it was a blessing in other ways. I know what I’m like. Had I found the note before I would surely have dressed as she wanted and fought Egyptian guards as I battled to stand at the base of a Sphinx you can now only see from a distance.

Still, on our Anniversary, I visited the Temple of Isis on Philae; Isis being the God of death, healing and rebirth, this seemed hugely appropriate.

With no time to have my mum’s funeral before I left for Egypt, the whole holiday hung against the backdrop of having one within a week of my return. I know my mum would have been happy I’d gone though, and I know she wouldn’t have wanted me to cancel so I could bring her funeral forward. In many ways the trip became a celebration of both the lives of Gail and my mum.

Elsewhere on social media I posted a photo that I’d found amongst my Mother’s things; a picture I hadn’t even seen before, of me and Gail at our wedding. There seemed a decent symmetry in this and I find these things seem to help me.

Fourteen years for you Pet, sixteen for me…and counting? We didn’t make a decision to finish it – as if! –  that disease decided it for us. As long as I’m around though I’ll continue to count until I hear again your first words to me. “Hello, it’s me again” .

Happy Anniversary Pet, from the banks of the Nile to wherever you are. X 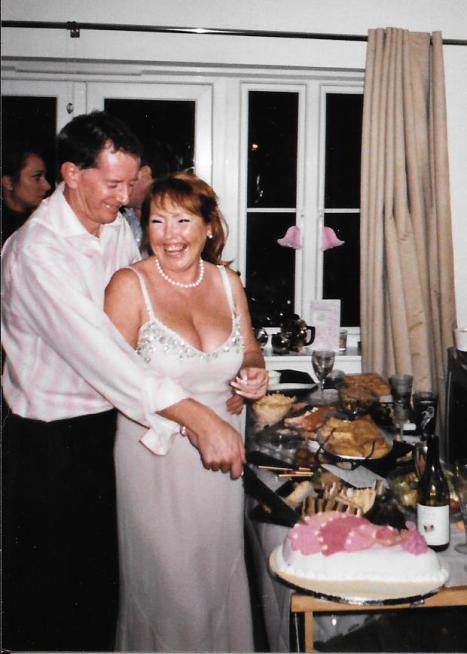 Gail didn’t want a ‘boring’ wedding cake. She wanted a Barbie. When I went to pick it up I found the local Baker who we’d asked to  make it beside herself as we ‘hadn’t told her the age of the little girl’ for her to ice on the cake. Her face when I told her not to worry as it was for a wedding is something I will never forget. My guess is she tells the story to this day.